Divorce in Pakistan; Talaaq Guide and Provisions Islam and Pakistan 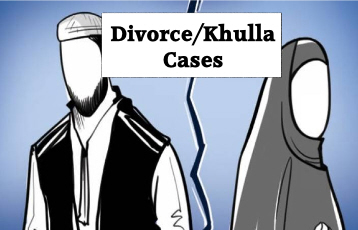 What is Divorce in Pakistan?

Divorce in Pakistan Can be in one of 5 ways, that are recognized in Pakistan. Talaaq in Pakistan (and Islam) is the word which means the ultimate termination of the Marriage.

Essentially, a Marriage is a contract between 2 parties (Husband and Wife) that they will remain in Wedlock with one another. Should any problems arise, both will always have a right to end the contract. Divorce is merely the exercise of this right, in a Marriage.

Nowadays, It is statistically more likely for a Marriage to end in Divorce than to last forever. Although our society doesn’t discuss this openly, and it is currently a taboo subject, it affects millions of people every day.

Who has the right to give the Divorce?

Marriage is a contract. Just like a contract, the ability to end a contract is a vital part of an enforceable contract. It is an inherited social myth that only the man can give the divorce. Although it is statistically accurate that the man usually gives the Divorce, women have the right to divorce also.

During Nikkah, the wife can be delegated the right of divorce (known as “Talaq e Tafweez“). If she has this right, then she is also able to pronounce divorce the same way the Man/Husband can.

If the woman does not have this right (whether she was unaware of it at the time, social pressure or didn’t ask for it) then she may still end the marriage through Khulla.

If a couple or any of the parties in the marriage wish to resolve their marriage with Judicial Assistance, they can always file a case for Restitution of Conjugal Rights.

The Laws of Divorce in Pakistan

As Pakistan is an Islamic state, the jurisprudence of the law stems from Shariat (Islamic Law). Let’s see the various quotes in Islam and the Quran to understand the Principles and Ethics of Divorce.

” Of all the permitted acts, divorce is the most abominable by the Almighty Allah.”

By Pakistani Law, Pronouncing Talaaq is the power that the husband (or wife, who has been assigned this right as per their nikkah-nama) may, at any time, release the other party from the marriage by Pronouncing “Talaaq” (I Divorce You) 3 times.

“If they disagree and must part ways, Allah the Almighty will provide abundance for all, from His all-reaching bounty. For Allah cares for all and is wise.”

Divorce in Pakistan reliance on The Holy Quran; Chaper 4 Verse 130

In the religious context, it is the most hated thing one is allowed to do in Islam. Islam is a religion of peace and harmony, so wherever hatred has started to develop (even at the embryonic stages) one can exercise to en the relationship rather than allowing toxicity to spread.

The Legal Framework that covers Divorce is (But in no way limited to) the following:-

How does a Divorce in Pakistan happen?

If initiated from the Husband (or a wife who has the right stipulated at the time of marriage) to the other spouse it is termed “Talaaq“.

When a Wife (who has not been designated the provision of Talaaq) wishes to end the Marriage she has to file for Khula.

We offer both of these services, via our online divorce page, as well as consultations on the best procedure to follow, depending on your individual circumstances.

The 5 Different Types of Divorce Processes in Pakistan

The Different Types of Talaq

“And if a woman fears from her husband contempt or evasion, there is no sin upon them if they make terms of the settlement between them. A settlement is best. And present in [human] souls is stinginess. But if you do good and fear Allah – then indeed Allah is ever, with what you do, Acquainted.”

“Talaq-e-Biddat” or “Talaq-ul-Bain” is very controversial in our society as a form of Divorce. If contested, it can be considered as one divorce (as opposed to three consecutive talaaqs). It has been outlawed in India, and, for the time being, is not outlawed in Pakistan.

“Talaq-e-Sunnat” and “Talaq-ul-Raje” are the first 2 revocable divorces that can be pronounced in both forms mentioned below.

The most acceptable Divorce, thus most Practiced, is “Talaq-e-Hasan”. This is the ‘proper’ form of talaq in the eyes of the law. In this form, three different pronouncements of talaq are made by the Divorcer at consecutive monthly intervals.

“Talaq-e-Ahsan” is when the Divorcer Pronounces “I have divorced thee” once and the couple then observes iddat (which is counted as 3 consecutive months). If the couple rekindles their relationship within these 3 months, then they inform the Union Council of their reconciliation. If they do not, Marriage is then dissolved.

“Talaq e Tafweez“ is a delegated divorce given to the wife at the time of marriage.

Can a Talaq Divorce in Pakistan Happen online or Abroad?

The short answer is, Yes, depending on the Specific Circumstances around the Marriage.

Sometimes, due to the messy nature of divorce, a party (Husband or Wife) may not wish to face the other party (i.e. citing safety fears or concerns) who may elect to give a trusted person the Special Power of Attorney to represent them on their behalf.

If the marriage is registered (and has happened in) Pakistan, then the divorce can take place whilst the Husband and/or wife is abroad.

We have a Special Service that we offer special Legal Services Overseas Pakistani’s through our Online Divorce portal.

Divorce in Pakistan can be executed if the person executing the Divorce (Divorcer) is doing so out of his free will. If the Spouse pronouncing the Divorce is under duress to do so, it will be considered an invalid Divorce.

Another Condition of a divorce being implemented (Divorce or Khula) can only be implemented if the wife/woman is not Pregnant at the time of Pronouncing the Divorce.

Being a subject of Domestic Violence, Alcoholism, Drug Abuse, Mental Torture, Defamation in Society/Within Family, not maintaining the family, being ill (to the point that the other spouse cannot handle it) and being infertile are other factors that can be claimed to be grounds of divorce.

Dower and Dowry Articles (Known commonly as “Jehz”) are usually a feudal point in any divorce case. The smallest things are brought up, so its important to consider this factor.

Where the woman (wife) receives the divorce, she can apply for 3 months of Spousal Support (alimony). She can also file a lawsuit for retrieving her Marital Gifts, Jehz, Haq Mehr (if unpaid). In return, the husband may ask for his “Benefits” to be recovered.

In the Instance of a man (husband) receiving a khula (or a divorce notice) from his wife, he may file a lawsuit for “Recovery of Benefits” and a partial return of the Paid Haq Mehr.

It is important to note that if a fake case is lodged, then the victim can file a counter-suit for Malicious Prosecution. As well as possibly other civil and criminal charges.

Spousal support (Alimony) is the amount of money paid from one spouse to another. In Divorces in Pakistan, it is almost always the man paying the wife. The reference from the Qur’an on this matter is as follows.

“Lodge them [in a section] of where you dwell out of your means and do not harm them in order to oppress them. And if they should be pregnant, then spend on them until they give birth. And if they breastfeed for you, then give them their payment and confer among yourselves in an acceptable way; but if you are in discord, then there may breastfeed for the father another woman”

The period of time a woman can claim alimony (spousal maintenance) is 3 months, to cover the period of iddat. This is usually calculated on the male’s disposable income/monthly earnings. The reference can be found in the next verse.

“Let a man of wealth spend from his wealth, and he whose provision is restricted – let him spend from what Allah has given him. Allah does not charge a soul except [according to] what He has given it. Allah will bring about, after hardship, ease. “

When a woman files for khula, this amount is usually not due; as she is leaving the marriage on her own accord.

The litigation of Child Custody, Child Visitation Rights and Guardianship are totally separate from divorce proceedings. It is another myth in our society that divorce has any effect on the ultimate outcome of Child Custody.

In Child Custody cases, Judges only keep one factor in mind, which is the paramount welfare of the minors. This factor is irrespective of what the parents of the minor wish, and based solely on the evidence presented in court. These cases have their own merits and circumstances.

Speak to us about your Divorce in Pakistan Today!

We can even take-over existing cases or present a new one.  Our Lawyers also abide by our “24Justice.pk Fixed Fee Policy” which means you do not have to worry about any unknown and hidden extra charges.

Speak to our Specialist Family lawyer today to see if we can assist you in any way. Whether it’s filing an application at affordable prices or contesting specific issues.

To find out more, Download Our Legal Services and Online Lawyers App. From here or by Searching for “24Justice” from the Google Play Store. Once installed, upload your Query/Case/Question and one of our Trusted and Verified Legal Specialists will respond.

Alternatively, Simply fill out the form below as best as you can, and you will receive a response in 24 Hours from a Legal Specialist, who will give you free advice on your matter. If you do not get a response, simply call us on 0308 551 0031 (Outside of Pakistan/Whatsapp Number 0092 308 5510031)