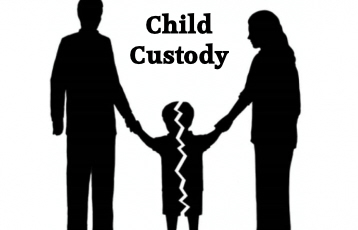 What do Child Custody Lawyers do in Pakistan?

In this article, we will briefly be discussing elements and key factors found in the process of Child Custody Litigation in Pakistan.

Our Child Custody lawyers are well versed in Child Custody law, as well as psychology and Mental Wellness. This allows our lawyers to handle sensitive cases effectively whilst ensuring easement to the litigants (usually the biological parents).

What is Child Custody?

Child Custody cases in Pakistan determine where a child will stay in the event the parents separate (or are deceased) or are not able to live with their own child together.

The Paramount consideration for Courts in Child Custody Litigation is always the welfare of the minor/s.

Child Custody matters are very sensitive in nature and usually, stem from Divorce proceedings, although it’s not always the case. Child custody usually refers to who has the Physical Custody of a child whilst they are young.

The effect of Divorce on Child Custody matters

If the case follows (or is a part of) Divorce / Khula proceedings, it will almost always be complex and complicated. However, they can also be pre-determined ina Mutual Divorce.

In certain instances and cases, Child Custody can be a case on its own (ie if the marriage is still in place, or if it’s being conducted by a relative of the child).

In essence, both are required, and both are usually determined by the court. Guardianship is the Authority awarded to an individual (Who becomes the Guardian) to take decisions on behalf of the minor (Ward)

Custody refers to the Physical Custody of where the Child stays. As a child (or children) cannot be in two places at once, Custody is awarded to one parent (Who becomes the Custodial Parent).

Who can Apply for Guardianship for a Minor?

Guardianship can be applied for by anyone related to the child. In Child Adoption cases, the Adopting Foster Parents can (and need to) apply for this also. Guardianship, by default, is naturally the Father. As the father bears the expenses of the child, he is given this right by default.

In Pakistan, a trend is now emerging on Joint Custody is the usual practice (where the two parents attempt to share almost equal time with the minor, to prevent alienation of the child from either parent or their extended families).

In A Supreme Court Ruling (2019) A Father is given half of all school holidays, Alternative Weekends and Gazetted Government Holidays, as well as Birthdays and Bereavements.

If you have been given a simple visitation schedule for your child, you can always challenge the Visitation Schedule given. If it’s awarded from Session Court (Family Court or Guardian Court) you may approach Additional Sessions Court.

If you still are not satisfied with their Judgement you can approach High Court. Finally, if the aforementioned doesn’t serve justice, you may even go to the Supreme Court. We can help you with each and every step of the way.

How do Child Custody Cases work in Pakistan?

Child custody cases are incredibly tricky, as Judges have a lot of factors to consider. It’s not surprising that it’s ever-changing, and relies heavily on Case Law, and usually requires Experienced Legal Lawyers and Attorneys. The paramount objective is always the welfare of the minor, which, unless fought spirit-fully, can be an obstacle.

Duration of a Child Custody Lawsuit in Pakistan

Despite the High Courts giving a deadline to lower courts of Child Custody cases to be heard in 6 months, this is rarely followed.

Due to the complex nature of Child Development and Psychological factors affecting the Child during litigation, such cases can take several years. Especially after you factor in appeals and miscellaneous applications.

Family Courts operate in a similar fashion to Civil Court Proceedings. It is noteworthy to mention that not all Civil Procedures are binding on family court, until there is a reason for Justice to be served down that route.

Who is usually awarded Custody?

This is a question we get asked all the time! and the answer is always “It depends”. Every case has its own individual merits and circumstances.

The period of Physical Custody a mother is usually awarded primarily is due to “Hizanat”, however, she may not be entitled to this custody depending on certain factors.

Under Shia law, A mothers hizanat (providing she has not voluntarily given this up or has not been disqualified) will be for a young son until he is 2 years of age, and for a young daughter until she is 7 years of age.

Under Sunni law, A mothers hizanat (providing she has not voluntarily given this up or has not been disqualified) will be for a young son until he is 7 years of age, and for a young daughter until she reaches puberty (Which courts have been considering the age of 9 years).

The Non-Custodial Parent gets access to their Children by way of a Visitation Schedule drafted by the court. This is usually where the problems occur.

10 Factors that Courts in Pakistan consider when awarding Custody

Factors that can disqualify a Mother from her Hizanat

Naturally, the Character of the mother is always under scrutiny if she is the Custodial Parent. The upbringing of the child (Their grades, cleanliness/hygiene, fitness, etc) is something the Non-Custodial Parent can always monitor to ensure the Welfare of the minor is being maintained.

If it is uncovered that the Mother (If she is the Custodial Parent) is a convicted criminal, or a drug user, or is not in alliance with Religion, This can also disqualify her.

A Custodial Mother who has a bad reputation in society (i.e. for promiscuity) as well as hanging out with the wrong crowd can also disqualify her for her rights.

If the mother is deemed unfit for Custody, then the Father has a chance of gaining Legal Custody and would become the Custodial Parent.

Factors affecting a Father from his Custody rights

The same principles that would disqualify a Mother from her Custodial rights would reflect on a father too. A key difference between the two would be the fact that the fathers payment of maintenance would come into play.

A father is bound to pay maintenance for the up-bringing of his children. If he does so, then he has every right to apply for custody of his children once they reach “of age”.

Right of Grandparents to Child Custody

When a parent is unfit to be responsible for a child, or is deceased, the Grandparents are usually next of kin who may be awarded child custody in Pakistan.

In such cases the background of the Maternal and Paternal Grandparents will be scrutinized to better determine where the ultimate welfare of the minor lies.

Disqualification of Child Custody due to Second Marriage

Islam and the Laws of Pakistan are very clear that the aspect of re-marriage only affects the Mother in its entirety. A daughter cannot be exposed to a non-mahram, which a stepfather would be.

In certain cases, when the child’s welfare comes into play, then it can be a factor of a hindrance for the father. Otherwise, this rule is quite specifically for the mother.

These cases, due to their very essence and nature, are fought rigorously, that’s why our Family Lawyers are always available to guide you and assist you with your child custody matters.

Guardianship and Visitation Cases in Pakistan

Both Parents can apply for Guardianship, and getting it granted by the Court is subject to the particulars of the court. The Visitation Schedule varies from case to case.

The right of the Custodial Parent, of keeping custody of the minor (at any age) and the access of the Non-Custodial Parent (and ensuring they get to see the minors) are always pivotal factors in such cases.

Their conduct in proceedings, as well as the child’s upbringing, are brought into account. If the Custodial Parent is found not complying with the orders of the court, then an application for “Change of Custody” can be submitted.

What are factors Court Consider in Child Custody cases for Welfare of the Minor?

Paramount Welfare of the minor is usually the term that covers the overall benefit of the minor. The health, education, upbringing and overall well being of the minor (or minors) are factors the Judges consider.

How to get in Touch with our Child Custody Lawyers

Our Lawyers also abide by our “24Justice.pk Fixed Fee Policy” which means you do not have to worry about any unknown and hidden extra charges

To find out more, Download Our Legal Services and Online Lawyers App From here or by Searching for “24Justice” from the Google Play Store. Once installed, upload your Query/Case/Question and one of our Trusted and Verified Legal Specialists will respond.

Alternatively, Our panel of Lawyers is well-versed Specialists who can advise you and represent you fairly. Simply fill out the form below as best as you can, and you will receive a response in 24 Hours from a Legal Specialist, who will give you free advise on your matter. If you do not get a response, simply call us on 0308 551 0031 (Outside of Pakistan/Whatsapp Number 0092 308 5510031)